Zimmyngham is a nickname given to a city that exists only in Zimmy's imagination, although it tends to have an effect on other people around, and in some cases may also affect the physical world.

The first appearance is in a series of flashbacks to when Zimmy and Gamma used to live in Birmingham.

The first appearance Zimmyngham makes in the main-story is in Chapter 19: Power Station where Zimmy, Annie, Gamma and Jack Hyland are taken there. Zimmy, Gamma and Annie make it out unharmed, but Jack is manipulated by a spider-esque creature called a Whiteleg which slowly drives him mad.

Zimmyngham is later visited in Chapter 28: Spring Heeled, Part 2 where Jack's memory of himself is nearly corrupted by the Whitelegs, while Zimmy forgets who she is and thinks she is Annie. The Whiteleg is eventually killed and Jack returns to his sane self.

There's also a short appearance at the start and end of Chapter 38: Divine.

At the end of the next schoolyear the Seraph Squad and the Cruisebot team up to kidnap several of the students. One of the victims is Zimmy, whom they take in order to use her powers to distort reality. During this the Seraphs themselves appear as corrupted mechanical demonoid beings.

A group of face-less people, they are the only residential citizens of Zimmyngham. Even though they appear to be harmless, they scare the wits out of Zimmy. Despite typically not having a face, one of them looked like Katerina Donlan, including her face.

Small spider-like creatures that might hitch a ride with anyone who gets trapped in Zimmyngham. They also have a so called spiders nest, an abandoned apartment complex where most of them live.

Jack was affected by one of these, until Zimmy killed it.

Whenever Gamma and Zimmy are separated in Zimmyngham they meet up here.

The Iron Leaning Square is a town square that has a heavy resemblance with Victoria Square, Birmingham even though this resemblance is never mentioned. In the middcle of the square there's an Iron Leaning heavily resembling the Iron: Man. On the west side one can see the Spider's nest, filled with Whitelegs. This building takes inspiration from the local town hall.

The real-world example is on the left, the Zimmyngham version is on the right.

It is notable that all robots shown thus far, carry some resemblence with an animal of some sort.

A Seraph robot. Resembles some sort of bird of prey. 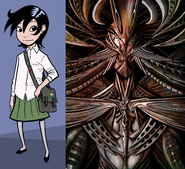 Katerina Donland
Add a photo to this gallery

Retrieved from "https://gunnerkrigg.fandom.com/wiki/Zimmyngham?oldid=11079"
Community content is available under CC-BY-SA unless otherwise noted.