Control over the Trees

Ysengrin is a canine mythic figure similar to Coyote or Reynardine. He carries a particular hatred for humankind, and instead favors the creatures and plants of Gillitie Wood. With Coyote's blessing, he now rules over the trees of the forest with a body of wood, though he almost constantly suffers from tremors because of it. His true body is gaunt and his limbs are weak, though it is unknown if this is because of Coyote's blessing. He loves Coyote and obeys his commands. Jones speculates that he is slowly approaching insanity. He is the former medium of the forest.[1][2] As of Chapter 66, he has become one half of Loup alongside Coyote.

Ysengrin was an acquaintance of Renard even before coming to Gillitie. When Coyote heard of Renard, he invited him and Ysengrin to the forest at the time when The Court and the animals fought between each other. For some time Ysengrin and Renard worked as rulers of the forest under Coyote. Ysengrin even became the general of the forest army and later, when the forest and The Court started communicating, he was elected Medium of the forest. Ysengrin also came up with the idea not to allow any humans into the forest without giving up their bodies first. It is unknown when Ysengrin got his Wooden body, but it is known that he got it from Coyote after he came to the forest, and presumably after Reynardine had been taken by the court.

Right after the start of the main-story, he found Robot in the forest and offered to give him a new arm, then planted a seed inside Robot.

After Antimony Carver had left Annan Waters he came there to bury the Tic-toc before he presumably ate Red and Blue. Months later at the end of the school year, he came back to dig up and remove the Tic-Toc. Then a meeting with the court was called.

He and Coyote showed at the meeting. Ysengrin was aggravated that the court had no medium and that they chose children to fill the role. After some discussion, Ysengrin brought out the wrecked Tic-Toc, claiming it hadn't been discovered until after months, also claiming that someone had planted it there. When Antimony slapped Coyote, Ysengrin went mad and tried to attack both her and James Eglamore. Coyote however, stopped the attack and carried him back to the forest. At some point during this attack, Ysengrin also dropped some seeds.

Ysengrin later welcomed Antimony on her first visit to Gillitie and took her to Coyote. When Annie left, Ysengrin guided her out as well.

Not very long after, Ysengrin was out fishing, using his wooden arms as a whip. He then stripped to eat the fish but Antimony showed up out of the bushes. Ysengrin became very enraged and nearly threatened Annie for tresspassing and spying. Coyote then showed up and Ysengrin realized Annie had been tricked. He then followed the two to look at Renard's original body. When the two were done talking Ysengrin carried Annie some of the way back to the court.

After Antimony had learned she was the reason her mother died, she came to the forest where Ysengrin found her and took her to Coyote. After it was decided she would stay for the summer, he took her to the tree elf village.

During her stay in the forest, he regularly checked up on her to see how she was doing, and even taught her to use her etheric skills better.

When Antimony was called back to the forest after the summer, Ysengrin again stood ready to welcome her and let her ride on his arm. When she met Coyote, he told her about his great secret. Because Ysengrin sees Coyote's secret as an insult, he leaves before they're done talking. Annie then finds Ysengrin and talks to him about Coyote's theory. Eventually, Ysengrin snaps and acts like an enraged wolf. He then chases Annie through the woods in his blind rage. After Annie has escaped Ysengrin snaps out of it. When Coyote shows up he's still in shock of what he attempted to do. Coyote reaches into Ysengrin's brain and pulls out the memory, then swallows it. Ysengrin then stands up as if nothing had happened.

Ysengrin and Coyote shows up at the court again when the new medium will be announced. When Andrew Smith was announced to be the new medium, Coyote decides to elect Antimony the new medium of the forest. Relieving Ysengrin of his role as the medium. Ysengrin does however state he will guarantee her safety within the forest.

The next time Annie comes to the forest Ysengrin seems confused that she doesn't want to ride on his arm. When confronted on his behaviour the last time she was there he doesn't remember it and says several times people have claimed he's done things that he can't remember doing. He assured Annie he would never hurt her, and then took her to the forest's ruins of the court. Here, they met his army. They've grown bitter with him and start attacking him. Annie runs away as he fights them single-handedly. He holds out for some time, but Annie returns just when he's about to lose the fight. She sets Ysengrin on fire but makes sure he's not harmed. They both fight a little bit until the army gives up and leaves. Ysengrin then compliments Annie on her bravery and lets her tend to his wounds.

When Antimony comes to the Forest after cutting out her negative emotions Ysengrin is unable to comprehend why she would do such a thing, but disapproves when she tells him she was following his suggestion, saying that he had not intended for her to treat the advice so literally.

He then destroys her blinker stone, which was keeping her emotions at bay, in order to force her to deal with her problems instead of ignoring them.

Later, when Antimony, Parley, and Smitty visit the Forest, he has a conversation with Annie while Parley and Smitty are busy listening to Coyote's story.

Sometime after discovering that Jeanne has been freed, Coyote grants Ysengrin his strength, as Ysengrin had always wanted. Upon receiving this gift, Ysengrin kills and eats Coyote, regaining his stolen memories and forming the being known as Loup. From this point on Ysengrin is mostly unable to act independently from Loup, though Loup does allow him to talk to Annie for a brief moment at her request.

Ysengrin was granted power over the trees by Coyote, and he has used this ability to create a wooden body for himself. However, his reliance on this wooden body has caused him to become frail, as he rarely uses his real body and his powers are slowly draining him.[3] 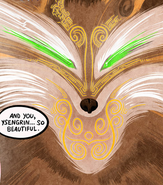 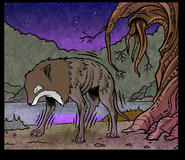 Ysengrin without his Wooden body. 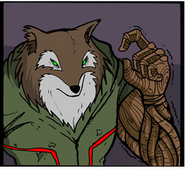 Old Profile Image
Add a photo to this gallery

Retrieved from "https://gunnerkrigg.fandom.com/wiki/Ysengrin?oldid=13196"
Community content is available under CC-BY-SA unless otherwise noted.