The tree elves live in Gillitie Wood. Antimony stayed with a family of them, the Anwyns, during her summer after year 9. Little is known about them, but the Anwyn family is a large one. It is headed by Khepi, the matriarch.

Through most of the main story of the comic, the tree elves rarely appear. However, they play a rather large part in the side comic Annie In The Forest, which is set during the same summer mentioned previously.

Some of the tree elves carry various symbols on their clothes. It is unknown what this symbol means as very few seem to carry it. Though seeing as Khepi's symbol appears on the illustration of her family (see below) it might show which house they belong to. Other than Khepi, Irial and another girl at the party can also be seen with one as well as a person on Annie In the Forest: Part 1 Page 5. There are also some seen at the first few pages.

Khepi is the head of the family Annie stayed with. She has many sons and daughters. She is mentioned by Annie in chapter 33, has a major part in the side-story "Annie in the Forest", and makes her first main-story in-person appearance in chapter 74. Tom has also made a drawing of Khepi that he posted on his Tumblr, which is in fact, her first appearance where she's drawn in full-color.

Khepi is a very loving, but strict character, having no problem in taking her under her roof for the summer, but expecting the daily chores to be done before anyone gets fed. She is pregnant during "Annie in the Forest" and gives birth by the time Annie returns to the Court. Her husband is named Mark.

Kamlen is one of Khepi's sons around Antimony and Katerinas age. During Annies stay with the family he was the first of Khepi's children to try and be friendly to her, for example by making her a wristband to hide Coyote's bind on her arm and inviting her to a hangout down by diver's pool.

Not only did he and Annie develop a close friendship, she also developed some level of feelings for him. It is revealed that he has a girlfriend named Irial.

Technically, Annie's crush on Kamlen was first shown in Zimmy's dreamscape of Chapter 38: Divine, which is somewhat intimate.

Annie in the Forest Part 1: Page 5

Sareed is one of Kamlen's two sisters. She has the ability to manipulate plant shapes. She aspires to use this ability to make houses when she's older.

At first she does not like Annie much, only interacting when she's mocking Annie's makeup with her friends.

When Annie and the young Anwyn hangs out at the Jumper's Pool she gives Annie some achewater. This intoxicates her, similar to hard liquor and makes her black out, which was not Sareed's intention.

Because of what she had done to Annie it was her responsibility to take care of Annie the following morning. After this the two develop a better bond and walk together out to the town. Kamlen mentions that Khepi is still mad at her for doing this. She also has a visible bruise on her cheek.

Irial is Kamlen's girlfriend, or "love" as they say. She is a very understanding young woman, and is alright with Annie having a crush on her boyfriend.

She also has some girl talk with Annie, giving her some tips on how to get a boyfriend.

Later, when Annie is passing out she's one of the first people to chastise Sareed.

Idra is an elf who was in the deep forest when everything froze because of Loup. She followed some tunnels into the Court, and lived there for months, avoiding patrols and hunting wisps for food. When Annie and co. went into a wisp nest, Idra noticed and decided to help them. She also recognized Annie from her stay in the village.

Recently the lover of James_Eglamore.

In early Court history, Jeanne had an unnamed lover among the tree elves.

Although their relationship appeared to be healthy before the court separated from the forest, this event proved to be traumatic for Jeanne. Eventually their relationship would be a cog in the court's schemes, and he died by being shot with Diego's Arrow.

After his death, Jeanne appeared to die of heartbreak on the shores of the Annan Waters. Though she seems to haunt the chasm there seemed to be no evidence of his spirit in the vicinity. Very recent events prove otherwise. 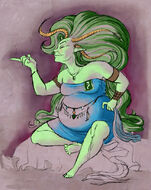 A picture drawn by Tom in 2011, not long after her being referred to in Chapter 33: Give And Take

An individual present during the founding of the court that might have been an elf.
Add a photo to this gallery
Retrieved from "https://gunnerkrigg.fandom.com/wiki/Tree_elves?oldid=13259"
Community content is available under CC-BY-SA unless otherwise noted.