After Diego's death the robots made this tomb and locked themselves down there after making new, simpler designs. In an attempt to learn more about the robots, Kat once woke up Old Robot.

When S1 was turned on it started following a script where another robot appeared and they fought until the latter was decapitated. After this, all the other robots in the tomb claps. S1 then walks up to a big rock wall and cuts a hole into a new room with a shrine where it kneels in front of a painting of Jeanne.

S1 works as a metaphor for Diego, while Bullbot works as a metaphor for Sir Young.The Bullbot was covered up with a sheet because it upset the robot visitors. Robot refers to it as a terrible demon. It is likely that Diego designed these robot and the script, and so also the tomb and shrine itself as not even the original robots knew how to make new robots of the same design.

The shrineroom was made by the original robots to honor the woman their creator loved, and that they were programmed to love. After discovery this shrine became somewhat of a Mecca to the robots. Kat also stated that the robots are always stopping by. 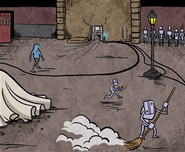 Retrieved from "https://gunnerkrigg.fandom.com/wiki/The_Tomb?oldid=12834"
Community content is available under CC-BY-SA unless otherwise noted.