They also allow the "unjustly dead" who have not made a mark on the world to do so after death by creating the essance of ghost stories. Though the realm of the dead is really made of illusions similar to a "ghost house" attraction, the ether makes it real and thus the stories it inspires keeps spirits in the minds of the living.

In order to get into ROTD one must simply say "I am a ghoooost" into the keyhole of any door, anyone can do it so long as they say it properly.

The ROTD appears different depending on who's looking. Truth is that everything is just costumes and planks, but the ether makes people percieve it as something more than that.

When in the ROTD, Kat's view of things greatly resembles an amateurish ghosthouse consisting of cardboard cut-outs, rubber masks, bats and spiders. This is very similar to, and might even be exactly what it actually is, perhaps reflecting Kat's strictly logical mind.

It is not known if Annie and Mort has the same view, but they seem to be very similar. Mostly, what they see is very scary and impressive. What appears to Kat as an old camcorder looks more like a giant eyeball in a fleshy mouth walking on bony legs that projects symbols into the air.

The halls of ROTD. Kat's view above, Annie's view below.

The library of ROTD. Kat's view on the left, Annie's View on the right (Final Records). 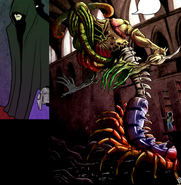 The vampire guy. Mort's View on the left, Annie's view on the right. This one is debatable as he might have simply changed his looks since he first met Mort.
Add a photo to this gallery

Retrieved from "https://gunnerkrigg.fandom.com/wiki/The_Realm_Of_The_Dead?oldid=10994"
Community content is available under CC-BY-SA unless otherwise noted.