Shadow 2 is one of Coyote's Shadow People, and the second character to appear in the comic, behind Antimony Carver.

Although he appears to be nothing more than a shadow, he does in fact have substance, being made up of a very thin layer of molecules. He can make noise by vibrating on a surface, a fact used by Kat and Annie in teaching him to speak English. As a result, Shadow has apparently developed a voice that sounds like a mix of the two.

After Shadow was separated from the floor by the sharpness of Coyote's Tooth, he has developed a 3 dimensional form. According to Tom, he practically has a human physiology. Initially, after changing into his new form, he didn't fit into his clothes. A few chapters later he is shown to grow into them.

He appeared in the Court soon after Annie's arrival there, and traveled with her, effectively becoming her second shadow - hence the name. He returned to the homeland of his parents Gillitie Wood in Chapter 1, but came back to Gunnerkrigg Court with Annie in Chapter 8. He was born in the Court. His parents arrived there when their tree dog was killed by Mr. Thorn, then Protector of the Court

Shadow was eventually, and unintentionally, separated from the floor by the sharpness of Coyote's Tooth and has joined the 3D world. According to Jones, this has never happened before. Presumably, Shadow 2 has returned to the original form of the Glass Eyed Men, prior to their "becoming shadows". Jones and Antimony then arranged for him to be placed in Foley.

After his return to the Court he has become good friends with Robot, but recently they seem to have developed a romantic relationship. 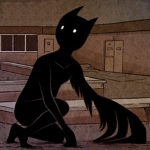 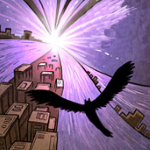 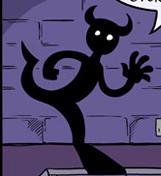 Shadow's Previous Form
Add a photo to this gallery
Retrieved from "https://gunnerkrigg.fandom.com/wiki/Shadow_2?oldid=13103"
Community content is available under CC-BY-SA unless otherwise noted.