Safety beacons are devices in the form of small thin wooden structure to use 'at the first sign of trouble', which summons Eglamore within 5 seconds.

A safety beacon was first shown when given to Annie by Eglamore on Chapter 20, Page 8.

Annie needed to use it on Chapter 39, Page 27 to escape Ysengrin when he became enraged about Coyote's Great Secret, thinking Annie was laughing at him. Annie later used it again on Chapter 66, Page 38 when Ysengrin was attacking The Court.

Little is known of how it works, though the valknut symbol that appears when it was used and teleportation effect suggests a relationship with Brinnie (who may or may not be Brynhildr, the Valkyrie), especially since Eglamore has not shown any signs of being able to teleport other than when called by a beacon. When used during Ysengrin's attack on The Court, it appears Eglamore was able to bring Parley with him, though she could have used her own power of teleportation. 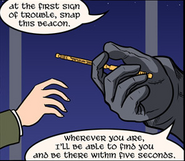 Safety beacon being given 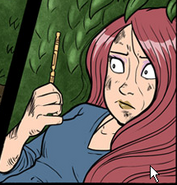 Annie about to break the safety beacon

Teleportation of Eglamore via safety beacon
Add a photo to this gallery
Retrieved from "https://gunnerkrigg.fandom.com/wiki/Safety_beacon?oldid=12807"
Community content is available under CC-BY-SA unless otherwise noted.