Start a Wiki
As well as humans and mythical beings, the Gunnerverse is populated by robots! Lots of robots.

The robots of Gunnerkrigg Court were created by Diego in the early days of the court. Their complexity ranged from simple machines to complex golem-like automatons with coding indecipherable to the everyday person. After Diego died, the Robots of old set to the task of creating their "offspring" in order to ensure the future of their kind. With their work complete, the Ancient Robots choose to end their lives, as they felt that it was no longer their time. They built the Tomb and intentionally deactivated themselves, leaving the court in the hands of their children.

In terms of appearance, modern Court robots drastically differ from their progenitors. All robots have a grey-blue metallic plating, green "eyes" that can change to a red or orange colour depending on their mood. Robots of the old court were stylistically complex, deliberately designed to look human or insectoid. Though they have CPU sockets, they lacked a drive system, power source or any sort of electronically driven components.[1] Modern Robots, with some exceptions, are simplistic and blocky. The Old Robots designed them with what they considered to be elegant designs: efficient and looking more like a machine.

Interestingly enough, the Robots of the court all seem to be self-aware. Creating their own society outside of their service to the court, and are capable of feeling emotions like love. [2]

Main article: Tic Toc
The Tic-Tocs were not created by Diego. The robots of the court identify the Tic-Tocs to be "mythical ornithonics said to be older than the court itself" that were "sent to watch over them all by a divine being."[3]

The S-Models or Seraphs are a type of robot with ornamental angel-like wings descended from the S1 robot that initially depicted Diego's bizarre self-image in relation to Jeanne and the Court. The S-Models have been recently discovered to be almost like a robot (secret) police. Robot S13 in fact was an S-Model who became a "heretic" and went into hiding due to his prophecies of the coming of "the Angel" (now thought to be Kat).


The B Model robots are robots seemingly used to block access to various areas of the court during emergencies. They have heads which resemble traffic stop signs and appear to use a siren-like alert at times. Only some of them have arms and hands (but no fingers); these ones are usually the leaders.

The old versions used about 20 years ago can be turned off with the use of an Electro-disruptor. 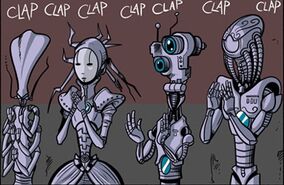 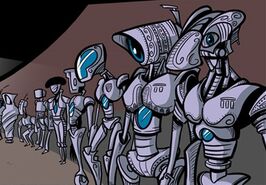 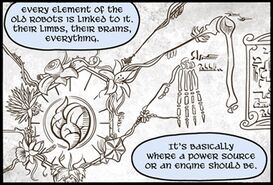 Retrieved from "https://gunnerkrigg.fandom.com/wiki/Robots?oldid=12318"
Community content is available under CC-BY-SA unless otherwise noted.