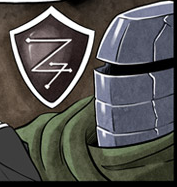 The Protector of the Court is an official role that is rather self explanatory. The protector of the court is to protect any inhabitants of The Court from outside attacks, namely, from Gillitie Wood. It seems at any given time there's only one protector, though there might be one apprentice.

The role was established at the very beginning of the Court; from the start it was held by Sir Young. He has a partner Rogat Orjak named Nevihta.

During his time there seemed to be numerous attacks on the court. This ended when he, as well as some of the other officials of the court, executed the conspiracy against Jeanne. As official protector, Sir Young had a major role in this plot.

Generations passed, and eventually the title was passed down to Mr. Thorn (this was during Surma Carver's attendance at the Court). He also has an Orjak, but this one is unnamed.

Once, he stopped a fight between Hyland and James Eglamore. Thorn believed Eglamore is a rather noble individual, but he needs discipline to subjugate his temper. He decided to take James as his apprentice.

On the very same day, Mr. Thorn stopped a minor attack on the court by a couple of Bound Dogs, his partner Orjak assisted him.

James Eglamore is the current holder of the title, and presumably Thorn's successor. He used to have Sivo as his personal partner, until he was possessed by Reynardine.

During Eglamore's time, the plot against Reynardine was executed. This resulted in Renard taking Sivo's body. Since the host would die if Renard exited the body, they were both kept prisoners in the hopes there might one day be a way to return Sivo to his personal self. Unfortunately, before such a method could be found, he was found by Annie, and immediately exited Sivo to enter her. Eglamore saved her, although he still entered her toy wolf.

While George Parley was in her 10th year, she took classes in swordsmanship with Eglamore, whom then noticed her marvelous skills, and during her 11th year suggested that the Court name her the medium's Protector, which they do.

It is also said that she might one day succeed Eglamore as protector of the Court.

It appears to be associated with the element of lead.

It seems every Protector works with a Rogat Orjak, but since Sivo (Mr. Eglamore's Rogat Orjak) died, they seem to have been absent from the Court.

Retrieved from "https://gunnerkrigg.fandom.com/wiki/Protector_of_the_Court?oldid=11464"
Community content is available under CC-BY-SA unless otherwise noted.