Paz Cadena-Blanco is a Spanish student in Antimony's class at Gunnerkrigg Court. She works in the court Animal Lab caring for laboratory animals.

Paz is a lean girl around the same height as Kat. She has light brown skin, light brown hair styled into an a-line cut and dark brown eyes.

Paz was born to a poorer family in Galicia, Spain. Over time she discovered she had the ability to talk to animals. Having somehow discovered her abilities, the Court offered her a place at their school in exchange for providing her family with the means to purchase a bigger house. When she was around 10-11 she left her home country for her first year at Gunnerkrigg Court.[1]

In Chapter 4, Paz becomes the first person to fall victim to Mort's new, subtler approach to scaring when he (at Annie's suggestion) creates the illusion of a homicidal clown that wants Paz's eyes.

Paz has the etheric ability to communicate with animals.[2] Her abilities are a combination of telepathy, actual speech, and an animal's natural method of communication.[3] Paz can understand animals without actively using her powers and they can always understand her.[4] She cannot, however, talk to spiders or insects such as ants. [5]

Paz has been characterised as an idealistic, brave, excitable and resourceful girl. Despite her knowledge of what the laboratory animals go through, she deliberately choose to work at the animal lab in order to ensure that they are kept under the best possible conditions despite the bad experiences they will face as laboratory animals.

Paz once had an unrequited crush on Matt.

Her reaction to Kat's attempt to comfort her after finding out that Matt was interested in another girl is believed by many readers to have triggered a sexual identity crisis for Kat. As it turns out, it also did for Paz, who after much agonising, confessed her feelings and asked Kat out on a date, who accepted. They're currently dating.

Paz's Spanish grammar is supposed to be occasionally off, as Tom has characterized Paz as “a Galician hick.”[6][7] 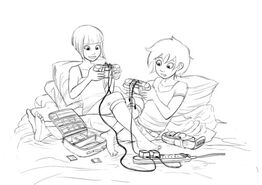 A sketch of Paz and Kat, by Tom. 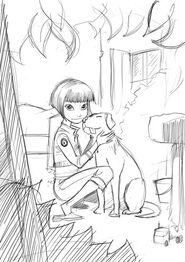 A sketch of Paz and a dog, by Tom
Add a photo to this gallery

Retrieved from "https://gunnerkrigg.fandom.com/wiki/Paz_Cadena-Blanco?oldid=12573"
Community content is available under CC-BY-SA unless otherwise noted.