Margo is a student in Antimony's year at Gunnerkrigg Court. She appears infrequently and speaks even more rarely. She is not known to have any sort of special powers, but she does have an interest in drawing and singing.

During year 7 Her, Sullivan's John, William Winsbury and Janet Llanwellyn worked on some sort of project.

The next year she and some of the other students snuck out to look at The Power Station when it went into extraction process. But before the process had started Zimmy and Gamma Czarnecki showed up, Margo tried to befriend Gamma but was shot down when Zimmy interfered.

When the kids of Queslett spent the weekend in Young's Park John is seen playing a tune for Margo.

Presumably later that same year (though it could be before the events of Young's Park), John played on his guitar for Margo. When a string broke they found an old mandolin they could play. When Margo sang along to John's playing, two horrifying ghosts came out of it and started haunting them. Even though they had put the mandolin back. After a few days they realized they didn't even know what they had been playing and singing, they just did it. When they went back to play the mandolin again the chords and words came to them from nowhere, and the ghosts slowly grew more normal. At the end of the song, they looked like regular people again, just ghosts and then they left the two alone. After this they presumably became boyfriend/girlfriend.

Next year Margo and some of the other students again snuck out at night to meet outside of school. During this night, she and John told the other kids of the events of the mandolin. Later, Margo is seen drawing Annie and Jack.

John plays a song for Margo 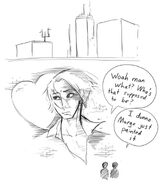 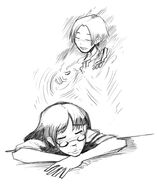 Twenty one years later.
Add a photo to this gallery
Retrieved from "https://gunnerkrigg.fandom.com/wiki/Margo?oldid=11995"
Community content is available under CC-BY-SA unless otherwise noted.