Lead is a main group element with a symbol Pb (Latin: plumbum). Lead has the atomic number 82. Lead is a soft, malleable poor metal, also considered to be one of the heavy metals. Lead has a bluish white color when freshly cut, but tarnishes to a dull grayish color when it is exposed to air and is a shiny chrome silver when melted into a liquid. Lead is used in building construction, lead-acid batteries, bullets and shot, weights, and is part of solder, pewter, and fusible alloys. Lead has the highest atomic number of all stable elements, although the next element, bismuth, has a half-life so long (longer than the estimated age of the universe) it can be considered stable. Like mercury, another heavy metal, lead is a potent neurotoxin that accumulates in soft tissues and bone over time. Alchemists believed that a philosopher's stone could help turn lead into gold.

Appearances of the lead symbol: 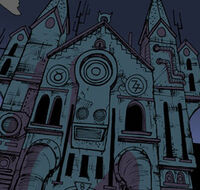 The most prominent occurrences of the symbol are on Eglamore's and the elder games teacher's armour and in his office, suggesting that lead is associated with the office of Protector of the Court.

Whether the appearance of that symbol on the face of a Gunnerkrigg Court building points to a deeper meaning in connection with the Court itself is unknown. Its presence on the poster may indicate that lead is involved in etheric studies undertaken at the Court (similar posters have been known to appear elsewhere in the school).

Retrieved from "https://gunnerkrigg.fandom.com/wiki/Lead_(alchemy)?oldid=4627"
Community content is available under CC-BY-SA unless otherwise noted.