Katerina Maria Donlan is the daughter of Anja and Donald Donlan and Antimony's best friend. Her mother often calls her Katja, but she is mostly referred to as Kat.

Kat has dark brown eyes and black hair. Unlike Annie, she is more likely to experiment with different hairstyles, but usually keeps it cut short. On the occasions we have seen Kat with longer hair, it has been shown to be very similar to her mother's, wavy and with slight curls on the ends. Kat usually wears practical clothing such as t-shirts, jeans, shorts and jumpsuits. She rarely, if ever, wears dresses or skirts outside of her school's uniform. She doesn't wear makeup or jewelry.

Before attending the school, Katerina was raised by her parents at the court and briefly lived in Scotland when she was very young. During her early days attending school as Gunnerkrigg, Kat had a hard time making friends despite her personality. Prior to meeting Antimony, she had been ostracized by the other students because of the fact that both of her parents are teachers and she had no problem achieving high grades. This caused other students to think that her parents were helping her with her work and they would get in trouble for associating with her.

Well into year 7, Kat walked in on her Mother crying over Antimony's student transfer letter. Anja tells her daughter that she just has a cold and suggests that she could become friends with the new student. The next morning, she introduces herself to Antimony and invites her to play on the playground. She asks the girl if she could call her "Annie" and Antimony agrees.

In contrast to Antimony's more subdued personality, Kat is more outwardly emotional, outgoing, cheerful and friendly. She is an empathetic, caring person and like Annie, she is naturally driven to help others.

She is extremely gifted at all sciences and technology, and is enthusiastic about anything related to those topics. Despite living in a place where magical happenings are common, she did not believe in magic previously.[4] After her adventures with Annie, she has become more open to the idea,[5] [6] however, she still has little patience for the idea that etheric elements of the court just cannot be explained. She is also shown to be a hard worker, working on personal projects for extended periods of time.

Kat's loyalty to her friends and her undying focus in her goals makes her prone to hiding her problems away from her friends and shouldering unnecessary burdens, out of a fear of burdening them. This is especially true with Annie. When in confronted about this, she can be somewhat stubborn about being open with her feelings, often denying the existence of the problem, and it can sometimes take a lot to get her to open up. This is especially true when she is focused on a project and has hit a roadblock. Additionally, her loyalty to her friends can sometimes make her jump to conclusions about people, as shown with her initial, reasonable reaction to Annie's father prior to meeting him.

Her other interests include comic books, video games, tv shows and movies such as Hellboy[7], Metal Gear Solid [8], The X-Files [9] and Princess Mononoke.[10] She also enjoys listening to music like Orbital, Daft Punk[11], and The Prodigy.

She speaks with a mild Scottish accent.[12]

Kat seems to possess a rare empathy with machines perhaps similar to Antimony's empathy with supernatural beings. This also appears to manifest as an unnatural aptitude for understanding mechanical constructs, specifically robotic code and physical structure (as seen in Chapter 33, Page 17). This also seems to manifest in the form that her subconscious projects (Chapter 33, Page 7). This might extend beyond just a talent, as seen in Chapter 38, Page 24.

Kat also appears to have a unique view of particular parts of the etheric world. When in the Realm of the Dead, she sees a much simplified version of what is being projected, allowing for her to go through processes. Kat sees a small room decorated for Hallowe'en with a single book and some VHS tapes guarded by a cloaked figure who she orders to leave. When she orders the guardian out, Mort and Antimony gape at her audacity, and it is revealed that he is truly a towering monster guarding a cavernous library, which Kat remains oblivious to. When later preparing to make a record, Kat uses what she perceives to be a "junky old camcorder." However, the others see a massive eyeball resting on a legged pillar of flesh. It is unknown if this level of perception extends to other etheric beings and places, as Kat is rarely directly involved in such things. However, she sees the psychopomps in the same forms that are reported by others. She also appears to see Shadow 2 and the fiery effects of Antimony's blinker stone without any reported differences from others, although this could be attributed to the simplicity of both (fire and shadow would be difficult to simplify more than they already are).

Kat once had a kiddie crush on longtime family friend Eglamore. She once had a relationship with a boy named Alistair, who turned into a bird; since then, she's become unusually fond of birds in general.

Kat had trouble connecting with other students in her first year, because of her unusually good grades and personal relationship to some of the teachers. Anja suggested she try to befriend Annie as she arrived, and the two became best friends.

After comforting Paz with the news that her crush on Matt was unrequited, Paz mistakenly thought that Kat was flirting with her. It was then strongly implied that she was either questioning her orientation, or is merely highly uncomfortable when people imply she might not be straight or cast doubt on her perceived femininity. After much agonising on both sides, Paz confessed her feelings and asked Kat out on a date, and she agreed. They have been in a relationship since then.

Her workshop, inherited from her mother, is set above the 'tomb' of the original robots built by Diego.

Due to her robotics abilities, historical discoveries, ability to read machine-written code and efforts to create bio-robotic hybrids, she is referred to as 'the Angel' by the court robots, especially by her friend, Robot S13. She has amassed something of a robotic cult.

Kat's appearance around the start of the comic.

Kat in her work overalls. Kat being identified by the creator's symbol

An Ink Washed drawing of Kat. By Tom (Source) 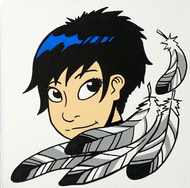 A sketch of Paz and Kat, by Tom. (Source) 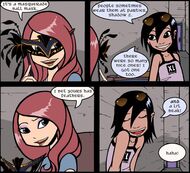