Jones is an ageless enigmatic being who appears to work for the Court while not being a part of it. [1]

Jones appears to be a woman of average height and build, with olive skin, short blonde hair and black eyes. Throughout her existence, her hair has never grown from its set length, though she has changed the style through the ages. She's usually professionally dressed whenever she is seen. She never emotes, despite having the ability to, because she's observed that it tends come off as unnatural.

Jones is a unique being: at least as old as the planet Earth itself, eternal and unchanging, she does not breathe, eat or sleep, nor can be hurt in any manner. Indeed, she does not consider herself human in any way, or even a living being. She does not know what she is, exactly, but tends to define herself as something similar to a stone: non-living, unemotional, constant. Though the comparison isn't perfect, she, unlike a stone, cannot be broken.

Other elements of the Jones condition as described by her are: She can remember every moment of her existence with clarity, is incapable of feeling emotions (maybe), and there is no known material that can stop her movements - she can crush stone or bend metal like so much cotton candy. The only force that visibly affects Jones is gravity: she sinks on soft surfaces and prefers to walk through bodies of water rather than find a boat capable of supporting her.

Despite her inability to experience emotions, she learned social norms through close observation and mimicry, and is quite capable of recognizing emotional states in others - more than a few times using this to measure or push other people.

In order to observe human life, she will occasionally find someone and choose to live their life with them as a companion. When the person dies, Jones will usually take on their name. Eglamore is one of these people.

Recently Antimony suggested that she does have emotions, and that she took her companions' names out of love. Although this was a stark contradiction to what Jones had believed for millennia, she made a (relatively) touching display of her appreciation to Antimony (pausing for several seconds, then saying thank you). She also appears to feel some kind of connection with or sympathy for other unique beings, such as Shadow 2.

Jones appears to be an open secret at the Court - Parley and Smitty certainly don't care much for her ability to shrug a sword blow like a mountain.

Her earliest memory is from the Hadean eon during the formation of the earth.[2] At this point she already possessed the body of a grown human woman. She's buried in magma and awakened during the silurian period at the bottom of the ocean. At some later point she walked across a glacier during the Pleistocene epoch.

She found a tribe of early European humans and decided to live with them as they looked somewhat like her. She helped them hunt aurochs and dressed like them.

Later, she parted with the humans and walked across the Gobi Desert for an unknown reason and eventually ended up in Rome in time to see it burn down in 64 AD. After the Roman empire collapsed she eventually found her way to a European (possibly British) village between 1119 and 1312. She was driven (or left by choice, since there was likely nothing that could physically compel her to leave) from the town when the villagers and a Templar claimed she was a devil.

In the 17th century, she was on a ship that traveled to Jamestown. Later, in the 19th century she had the name Elizabeth and served as the governess of the rich child Samuel Langdon. She remained with him for the remainder of his long life. After he had become old she took the name Elizabeth Langdon and acted as his lost daughter. After his death she inherited his estate, and stayed inside for years which eventually caused suspicion among the authorities that believed her to be an impostor and arrested her.

She later took the name Emma and got a job at a filling factory in England during World War 2. The factory was bombed and her companion Edward Jones died. She then took his name, which she still has.[3] Not much later (possibly earlier), she was walking around the streets of the city to feel the power of the bombs, but a young boy tried to get her inside a shelter, resulting in his own death. Since he died because of her, she claimed he should not be taken to the ether yet, to the displeasure of the boy's psychopomp.

Roughly 30 years prior to the main-story she went to James Eglamore's house to bring him to The Court. From this point on, she was his companion. She later introduced him to Donald Donlan on his first day at the court, about five years later. In the following years, she remained quite close with James,[4] although Surma Stibnite apparently disliked her immensely.

Role in the Main Story

Jones makes her first appearance during the meeting between Court officials, General Ysengrin and Coyote. She did not speak in their presence, but after their abrupt departure, she commented to the Headmaster that the General appeared to be on the "brink of insanity". She did not appear again until Chapter 17 where she observed Antimony, Andrew Smith, and George Parley mediating with the assistance of the ghost Mort.

Later, she gives Annie some general advice before she goes to the forest for the first time. Next time she guides the medium-trio through a simulation of the beginning of the court, and assisted Andrew Smith in flirting with Parley.

In Chapter 28: Spring Heeled, Part 2 she helps Annie find Zimmy and explains a little about her and the Ether.

When Annie ran away to the forest she came to pick her up, but ended up allowing her to stay. After a few days Jones came back to give Antimony her makeup and some clothes.

After Shadow 2's peeling from the ground she helped him start attending a class in Foley house and receives a phone call for Antimony from her dad.

She gave the Headmaster her recommendation for Antimony as choice of medium one day before Chapter 40: The Stone. And on the next day she tells Annie about her existence and a minor part of what role she's played in the human society.

She then appears at the meeting to declare the new court medium. When Andrew Smith was elected medium, Jones pointed out that this was not her recommendation.

Jones through the ages 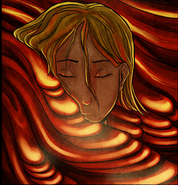 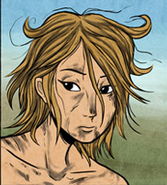 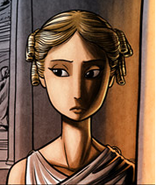 Retrieved from "https://gunnerkrigg.fandom.com/wiki/Jones?oldid=12947"
Community content is available under CC-BY-SA unless otherwise noted.