Hetty is an entity inhabiting a doll's body. She knows Reynardine, although their history is not made clear. She bears an alchemical symbol on her forehead and remarks on the symbol of antimony on Reynardine's forehead, showing she is familiar with his true nature. Hetty seems to be very vicious in character, going so far as to put fiberglass in the bed of her owner, Adam.

It is not known how Hetty became trapped in the dollbody or how old she is, the earliest known of her life is that she was at one point the property of an unknown girl. In order to break this ownership she supposedly arranged for said girl to meet with an accident, resulting in her death.

Unfortunately for Hetty, this girl had written in her diary that her little brother, Adam, would inherit Hetty, should anything happen to her. Because of this, she is now the property of Adam instead.

Adam knows nothing about Hetty, as she does all she can to keep herself a secret from him. Even though he doesn't know about her, she decides he needs to be punished for his neglect, namely different types of torture. This torture continued for an unknown time, but it is known that she put fiberglass in his bed while he was asleep.

Some time after the events with the fiberglass, she was walking around the Court, looking for Reynardine. When she found him she updated him on her newest plots, and asked him for help collect various tools, such as needles, matches and combustible fluid from a supplyroom. Reynardine carried said things inside his body. Later, they visited Adam's school where they saw him playing football. Hetty then reveals she aims to kill him as well, despite him just being a young child.

After seeing Adam they kept walking through the empty streets of the court, talking about their lives, Hetty trying to convince him to kill Antimony. When they came to a backalley, Reynardine suddenly reverts to his plushie form and drops all the things he was carrying for Hetty. Renard then explains he would never hurt Antimony, and stomps on the lighter fluid, soaking Hetty, before he lit a match and threw it at her.

Hetty is now fully ablaze, her spirit form exits her doll body, revealing she looks like a three-eyed crustacean. Renard then goes back to his wolf form and mauls Hetty's spirit, until she's completely dead.

Hetty has an alchemical symbol on her forehead. It has been subtly shown in a number of pages during the chapter, including Page 14 (4th panel), Page 16 (6th panel), and Page 20 (5th and 7th panel). The symbol is shown the most clearly in the 7th panel of Page 20 or in the last panel of Page 21.

Hetty doesn't like wearing the symbol, so prefers to "hide" it. The more obsessed she becames while talking and less self-control, the more visible the symbol is. 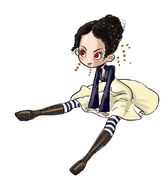 A drawing taken from Tom's tumblr 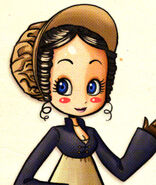 Bigger version of the drawing appearing on the bonus page

Add a photo to this gallery
Retrieved from "https://gunnerkrigg.fandom.com/wiki/Hetty?oldid=12597"
Community content is available under CC-BY-SA unless otherwise noted.