Gillitie Wood is home to Coyote and his mythical companions, Ysengrin, the Fairies, the Shadow People, and many other unnamed species. Coyote has stated that humans once lived in the woods, and that the creatures who reside there now are descended from those humans. Gillitie Woods communicates with Gunnerkrigg Court by sending up a green signal flare that is similar to Antimony's red Blinker stone signal.

A long time ago Gillitie was home to only animals and etheric beings, but humans imigrated to the forest to escape an unseen threat. Although they lived in peace at first, the humans eventually started making large buildings that drove the animals off. Eventually they had built what they called Gunnerkrigg Court and atempted to tame the animals, resulting in counterattacks. Coyote then arrived at the forest with Renard and Ysengrin and saw the fighting. To put an end to it he separated the two factions with a great ravine. When the two factions were devided, some of the buildings were trapped on the forest side of the ravine. The buildings were eventually left, but the human inhabitants were allowed to stay in the forest.

Coyote later invited his Shadow People as well as Renard and Ysengrin to live there. Ysengrin later become the general of the forest. Roughly 20 years before start of the comic, the shadow people attempted to attack the court with two Bound Dogs. After some time, Renard was lured to the court where he was captured and kept as a prisoner for years.

Creatures from the Wood can "switch sides" and join Gunnerkrigg Court. The creatures are given a test, for example, the two fairies introduced in Chapter 8 must be killed in order to attend school at the Court. Humans from the Court may also switch sides to the Woods by taking a test, although it is unknown if it is similar to the Gillitie Wood's test. In Chapter 13, Kat's love-interest, Alistair Kershaw, turns into a bird and flies off to Gillitie Wood with his parents after they passed the test.

This is the only known way humans may go into the Woods without being formally invited,[1] since it is forbidden to cross the bridge.

The remnants of the human settlements in the forest. 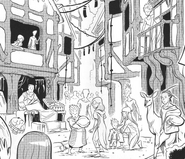 Jumper's Pool
Add a photo to this gallery

Retrieved from "https://gunnerkrigg.fandom.com/wiki/Gillitie_Wood?oldid=13193"
Community content is available under CC-BY-SA unless otherwise noted.