Flashbacks are drawn to indicate a past event recalled. Tom draws them in a particular way: the stone texture used for backgrounds also covers foreground characters and objects; and sometimes the flashback's first frame's upper border and last frame's lower border are rounded.

Brinnie from chapter Ties, p. 539, a complete story from the past but not a flashback. 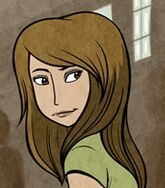 Brinnie in flashback recollected by Donald in the Microsat chapter. P. 1010 shows the rounded frame border starting the sequence.
Add a photo to this gallery

Retrieved from "https://gunnerkrigg.fandom.com/wiki/Flashback?oldid=12054"
Community content is available under CC-BY-SA unless otherwise noted.