Donald Donlan is the father of Katerina Donlan, husband of Anja, and best friend of Anthony Carver.

He was born and raised in Scotland[citation needed] before entering the Court as a student, where he was friends with Anja (although they soon became more than friends), Surma, Anthony Carver, James Eglamore and Brinnie. He was adept with electronics even then, and was known to use a homemade disruptor to get him and his friends past robot blockades.

He was roommates with Anthony Carver, and remains one of the only people Tony can actually open up to. The two of them often did things like using elaborate codes and sending satellites into orbit (such as Microsat 5).

He eventually became a maths teacher there, and has been shown to be not unfamiliar with etheric abilities. We know that he is unable to use a Blinker stone, but can control some etheric science through his wife's hybrid computer.[2] 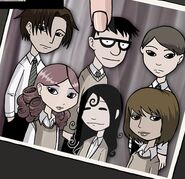 He does the crossword every day.[3]