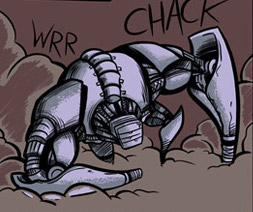 Bullbot is the nickname given to a massive, bull-like robot. Alternatively, it is known as the Hooohbot (named for the only thing it ever said).

Bullbot appeared in the robot arena almost immediately after S1's reactivation, then attacked S1, bellowing all the while. As the two fought, S1 blamed Bullbot for the death of Jeanne, and swore to avenge her. In spite of its size advantage, Bullbot was defeated and killed by the quicker and nimbler S1 in short order.

Retrieved from "https://gunnerkrigg.fandom.com/wiki/Bullbot?oldid=13265"
Community content is available under CC-BY-SA unless otherwise noted.