Bismuth is a white metallic element with a pink cast and is chemically similar to arsenic and (coincidentally?) antimony.

Bismuth might have had some role in the founding/creation of the court, as the element that started it is called the Seed Bismuth. 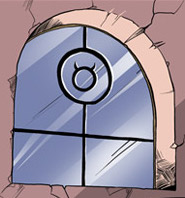 The symbol for bismuth seems to be an unofficial logo of the Court, appearing frequently in the background of the comic and on Robot's CPU. According to Jones, the presence of the symbol "serves as a reminder that the Court was founded on a union between technological and etheric design."

When Coyote recounts the story about the moon at the end of Chapter 20 , his form as the moon is the same shape as the bismuth symbol - the circle shows the moon with his smile and a single eye, and the "horns" on the symbol are his ears.

The Court was grown from the "Seed Bismuth", of which the seeds dropped off by Ysengrin may have been a related.

Given its unusual characteristics, Paracelsus referred to it as a "bastard" or "half metal." Given that the court is an admixture of science and the supernatural, of humans and nature, bismuth would be an appropriate symbol.

In alchemy, bismuth is represented by a sort of loopy figure-eight or the simplified bull's head that is also the symbol for the Zodiac sign Taurus. The use of bismuth in alchemy is unfortunately unknown.

However, in 1980, a scientist named Glenn T. Seaborg was able to transmute a minute quantity of bismuth into gold at the Lawrence Berkeley National Laboratory, via nuclear collisions.