Communicating with the Supernatural, Fire Manipulation

Chapter 1, Page 1
Antimony "Annie" Carver (/ˈæntɨməni/, AN-ti-moh-nee) is a student at Gunnerkrigg Court and forest medium. She is the primary protagonist and narrator of the story.

Antimony is a redhead, although the actual color of her hair in the comic is closer to pink. She bears strong physical similarities to both of her parents, especially with regard to her hair and eye color, both of which she shared with her mother. Since being injured[3] by the ghost near the Annan Waters, Annie's ethereal self had a diagonal cut on her left cheek, but this was wiped away by Jeanne after she was freed from the river.[4]

Throughout the comic, she has worn a variety of outfits, frequently consisting of blouses, dresses, and long skirts. She seems to favor blues, as she has been seen wearing several articles of clothing in this colour. She wears a pendant in the shape of the alchemical symbol for antimony, given to her by her mother.

In her first year at Gunnerkrigg Court, she shows Kat a pendant in the form of the alchemical symbol for the metal antimony hanging from a necklace, explaining that her mother, Surma, gave it to her. She always wears this pendant.

Much like her mother, she typically wears purple eyeshadow and beige lipstick. She is almost never seen without it, and it is implied that she uses the makeup as some form of defense mechanism[5]. After her father returns, he orders her to stop wearing it, and she has not been seen with it since.

Antimony has an extremely complicated personality. Over the course of the comic, her personality has developed significantly and become far more complex than it originally was when the story began.

Generally, Antimony presents herself as very calm and collected, never showing fear or doubt in the face of danger. As a result of spending the first eleven years of her life in a hospital, interacting only with her parents, the Psychopomps, and the dying spirits they guided into the Ether, she had virtually no opportunities to socialize with people her own age. In addition to this, her mother's illness - and her father's obsession with curing it - meant she had to become fairly self-sufficient and learn not to rely on adults for help. Over time, this morphed into an intense distrust of authority, which often gets her into trouble.

Despite her upbringing, her personality begins to (very slowly) shift when she arrives at the Court and meets Kat, who quickly becomes her best friend. She is shown to be much more open and emotive around Kat, but still struggles significantly with being emotionally vulnerable, as shown by her unwillingness to allow anyone but close friends to call her Annie. Her social skills have significantly improved, but Kat is still the only person she seems to trust enough to willingly show emotion to.

Partially as a result of her being part Fire Elemental, Antimony has an extremely strong temper, which she mostly attempts to keep under control by never allowing herself to show emotion, something she very much has in common with her father. Her typical method of dealing with her emotions is to ignore them until they become too much to handle and overflow, causing her to lose her temper, often in a wild, uncontrolled way.

In general, Antimony has very little regard for rules. She carries around a set of lockpicks, and mentions to Kat that as a child she would frequently break into locked rooms in the hospital to explore, a trait she did not lose upon coming to the Court. She is occasionally shown to struggle with considering what consequences her actions might have on others, likely because this was never something she had to worry about prior to arriving at the Court. She also appears to have very low self-esteem, as shown by her use of makeup[5] and her view of her own intelligence[6], which she seems very embarrassed of.[7] This also is likely influenced by her blaming herself for her mother's death, as well as the perception that her father blames her for this as well.

Upon her father's return to the Court, Antimony becomes somewhat emotionally unstable, regressing back to the way she looked as a child and separating herself from her fire elemental spirit by physically cutting off her hair. Her passive side regularly demonstrates an indifference to her father's return and actions, while her aggressive side showed a deep, unyielding fury towards her father. Following Ysengrin's intervention, Antimony more or less was able to return to her normal self, but appears to be more open and emotive since the incident.

She likes old books and folk music, and has an interest in biology, history, and mythology.

The comic often associates Antimony (and Surma) with fire in various forms. Chapter 16 flashes back to Antimony's childhood in Good Hope Hospital, where her mother asks her to intervene on behalf of the spirit of a boy who died after setting his house on fire. Antimony, terrified of the image of a room in flames, remembers her mother's words and finds the courage to bring the boy's spirit back into the real world.

Similar imagery is echoed later in the story: Chapter 24, Page 31 shows Antimony surrounded by the illusionary fire of her blinker stone, fooling adults into believing the trees of Young's Park are burning.

Coyote refers to her as "Fire Head Girl", while Reynardine tells her she has "a fire" in her, a fire that belonged to her mother. Coyote also refers to Surma as "fiery".

In Chapter 31, Page 32, it is revealed by Coyote that Antimony and her mother are descendants of a fire elemental, explaining the parallels. This has also affected her emotions, as Coyote describes.

In Chapter 44, Page 22, Antimony ignites herself and uses her powers to help Ysengrin and fend off attackers in the forest, addressing them in a form very similar to that of the fire elemental seen by Zimmy in Chapter 38, Page 15.

Annie has a natural gift with ghosts, gods, spirits, and other beings of the etherium, a trait she likely inherited from her mother Surma. Like her mother, she is naturally able to see and speak to the psychopomps.[8]

After acquiring a blinker stone, she gained the ability to look into and manipulate the ether to a point. She normally uses her stone to generate or manipulate fire, an ability that seems to come easily to her.[9] With her thoughts, she can will the fire she makes to burn some things, but not others, or make it undetectable to others.[10]

Later, Coyote taught her how to use her blinker stone to use the ether to telekinetically move objects outside of her reach.[11] Antimony has been seen using this ability several times, such as when she pushed a boat, opened a door from the other side, or lifted a rope.[12][13][14] She can also use the stone to see if other people have etheric abilities. [15]

Her abilities steadily increased to the point where she didn't need the stone at all.[16] After Ysengrin destroyed her blinker stone, she learned how to reach into the ether without it.[17][18]

She can also speak several different languages, including Polish, Spanish, and Ancient Egyptian.[19] It could be inferred that she learned many of these from her conversations with the Psychopomps.[20] 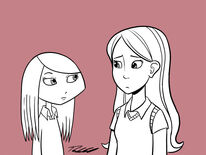