Annie in the Forest

Chapter 32: From The Forest She Came

Annie in the Forest is a two-part 64 page long mini-comic set during the summer Antimony spent in the forest. It is now available online for free under the Extra Comics section of the main website.

"Annie In The Forest, a story from Gunnerkrigg Court that shows just what happened when Annie spent her summer holiday in Gilitie Forest."

Antimony stares into the heart of a tree elf village , with its inhabitants staring back. Coyote appears and explains to them that Antimony will be staying with them for the summer and asks that she be treated as on of their own. He then calls forward Khepi Anwyn, the powerfully-built and heavily-pregnant matriarch of a local family. She crushes Antimony to her breast in a hug, much to the surprise of the girl. The woman then proceeds to drag her off to her new home. However, noticing that the crowd is still gawking at her, Khepi shouts at them to get back to their business. She comforts Antimony, saying that the green-skinned and green-haired elves have never seen someone with pale skin and hair like flame. She then brings Antimony to her home, explaining that she and her husband are the head of the Anwyn family, and that the group who have followed them here are her many children. Antimony awkwardly says hello. None of them respond. Instead, all of them enter the house. However, the house is raised off the ground, and while the elves can jump the ten feet to the platform above, Antimony is left on the ground. Khepi shows her the hauling rope that she uses since she is currently pregnant and unable to jump herself. Despite this, she is still surprisingly agile, swinging her whole body up onto the ledge when she can reach it with one hand. She directs her children to haul Antimony up while she thunders deeper into the house. Antimony holds onto the rope tightly and clumsily climbs onto the ledge. One of the Anwyn boys catches her eye and smiles at her, causing her to blush.

Khepi reappears loaded down with brooms, mops, and other cleaning supplies, informing Antimony that everyone in the house works for their dinner. If Antimony is to live there, she will live like it is her home and treat it well. No one eats before chores are done. She then crushes all her complaining children in a hug, telling Antimony that the will show her what to do.

Antimony mops the floor, watching the Anwyns (particularly the older boy) leap around the house performing chores. Later, a very grubby and obviously tired Antimony sits alone at the end of the dinner table. And considers Coyote's bind. She then notices the Anwyn boy watching her and blushes again while covering the bind.

In bed that night, Antimony quietly cries, thinking of Kat, Reynardine, and her mother. Suddenly her door opens, and the Anwyn boy enters. She is suddenly very nervous, and pulls the sheets up to her blushing face. However, he has simply come to wrap a cloth around her bind, stating that it might help her forget that it is there. He then leaves, and Antimony is left very confused and still very red.

The next day, Jones has returned, bringing Antimony non-uniform clothes and makeup, much to the girl's pleasure. As she puts the makeup on, she complains a bit about having to clean the house immediately upon arrival. Jones does not respond. Antimony hesitantly asks about Reynardine and Kat. According to Jones both were very upset, Kat especially. Mr. Eglamore had also questioned the safety of the plan, but Jones had decided that Antimony was unlikely to be in danger. With that, she leaves the forest.

Later, at a lecture or school of some kind, Antimony is once again sitting alone in the back. She sees three elf girls giggling to themselves. One suddenly turns around, her lips and eyes covered in paint in mockery of Antimony's makeup. Antimony then eats lunch alone. However, the Anwyn boy finds her, and calls down from a tree to ask why she wears the paints on her face. She explains that it is makeup, a human practice to enhance beauty. He once again causes her to blush by saying she is pretty enough as is, but he accepts that it is a human custom. He then introduces himself as Kamlen. Antimony thanks him for the cloth to hide the bind, and he smiles at her. Then she admits that she doesn't think that his siblings like her very much. He calls them chuckleheads, saying that they'd rather be afraid of her than try to confront her head-on. However, spots Ysengrin among the trees and admits his own fear of the wolf. He invites Antimony to meet him at Jumper's Pool when she has finished her business with Ysengrin.

Antimony then seeks out Ysengrin. Coyote has asked him to be mindful of her, which she finds very sweet of both of them. She then says that she thinks Jones is mad at her. Ysengrin tells her that Jones does not have feelings to hurt. Curious, Antimony asks what he knows about her. He says simply that she is immortal, having walked the earth long before man and being something entirely different from both creatures of the ether and mortal men.

He then begins to question her about how her stay is going. She admits to feelings of rejection, feeling that Ysengrin does nothing to assuage. She asks if Ysengrin or Coyote could speak to the elves, which Ysengrin flatly refuses to do. He will not allow her to run from her problems here as she did in the Court. He then asks if there is truly nothing she enjoys here, which prompts a very flowery vision of Kamlen in Antimony's mind. She asks Ysengrin to direct her to Jumper's Pool.

Upon arriving, she discovers that Jumper's Pool is a large, waterfall-fed lake surrounded by high cliffs. A shirtless Kamlen greets her from the waters below, much to her pleasure. However, upon reaching the lake shore, she finds an elf girl who Kamlen introduces as his love, Irial.

Antimony awkwardly sits with Irial as Kamlen performs dives. When she notices Irial's examination of her, she turns away. Irial kindly asks if Antimony thought that Kamlen was flirting with her. Antimony protests, but Irial explains that she understands, Kamlen being an overly-kind person. She then asks to play with Antimony's hair, finding it very beautiful. Antimony agrees, and while Irial braids her hair, a group of young elves appears. Irial invites Antimony to stay the night with them, as everyone is excited to meet her. Antimony agrees, pleased to be accepted.

When night has fallen, Antimony has been fully accepted in the group, and she answers questions about court life and things like robots. Then one girl questions her about a love back home, to which Antimony mistakenly answers Kat. Clarifying, the girl asks if Antimony likes a boy. After a moment's consideration of the boys she knows, Antimony almost randomly selects Jack. They tease her a bit, and Irial suggests that if she really wants a boy to like her, she should ignore him and make him chase her. Kamlen laughingly protests to these tricks and demands to be told if they are used on him. While the banter continues, a girl brings Antimony a drink. She tries it and finds it to be powerful alcohol. However, still feeling a bit alone and wanting to fit in, she continues to drink it regardless. She becomes very drunk, her vision becoming highly distorted. Eventually she fires multiple flares of magical fire into the sky and collapses, much to the distress of her new elf friends. They argue with the girl who supplied her with the drink as Antimony blacks out.

When she awakens, she has been returned home. She recognizes her nurse as the girl who gave her the drink, Sareed. The girl is incredibly remorseful, not having know that the elves' achewater would have such a powerful effect on her. However, Antimony's head is pounding, and she rapidly falls back asleep.

The second time Antimony awakens, Sareed asks her how she feels. Antimony is quiet for a second, then quietly begins to weep. She is overwhelmed with grief at having caused her mother's death. Before Sareed can comfort her, she has fallen asleep again.

Antimony wakes up a final time to witness Sareed weaving a small plant's branches together with magic. She comments on its beauty. Sareed hurries to get her a drink, which Antimony looks at suspiciously before the confirmation that it is just regular water. After a sip, she realizes how thirsty she really is and drains the cup before asking for more. She then asks if tree elf houses are made with the magic Sareed was using on the plants. The other girl confirms this, saying that she wishes to become an architect when she is older. Sareed then asks about Antimony's own magic, wondering about the fire she created the night before, all the elves being impressed despite their distress at her collapse.

They sit in awkward silence for a moment before Antimony asks why Sareed is at her bedside. The girl turns away before answering that because she caused Antimony's pain, she must be the one to help her, according to tradition. However, if Antimony does not wish her to be there, she will leave. Antimony quickly tells her that she is quite willing to have her there. They spend a long time after that talking and becoming friends.

Awhile later, Antimony believes that she has recovered enough for a walk, which Sareed agrees to. They chat happily as they wander the elf village. Then, as the enter the forest beyond, Ysengrin appears, having heard of Antimony's illness and wanting to confirm that she is well. Seeing that Sareed is frightened, Antimony tells her new friend that she will meet her later. Sareed agrees, wanting to show Antimony how to make some new boots. Ysengrin and Antimony then spend some time together, with the wolf shedding his tree body to relax with her in the grass. They talk about how Antimony is doing in her summer home while their etheric forms play in the air above.

Upon returning to the village, Antimony spots Kamlen. He greets her, pleased to see that she has recovered but annoyed that Sareed has apparently abandoned her. After Antimony explains why Sareed has left, Kamlen tells her that everyone was very mad at her the night before. Khepi was still threatening to chew the girl's leg off. Antimony says that Sareed has been very kind and that she enjoyed the night before despite the accident.

Upon returning to the house, Kamlen jumps to the entrance platform and greets Sareed. Both move to pull the hauling rope for Antimony, but she dismisses them. She uses her etheric form to pull herself up, and both the elves smile at her success before all three continue on into the house. 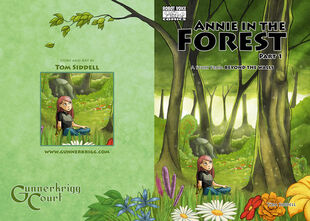 Full Cover for the Book Version of Part One 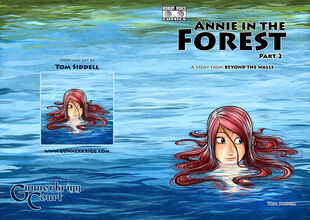 Full Cover for the Book Version of Part Two