The Annan Waters is the name of the river that separates Gunnerkrigg Court from Gillitie Wood. It lies at the bottom of a vast gorge spanned by a long bridge with bright lights and no railing.

The Waters, along with the gorge, were created by Coyote when he first arrived in the Wood. When he found out that the Court was trying to tame the residents of the Forest, he scored the earth with his claws in order to separate them.

Later, it played a major part in Diego's plan. Jeanne's lover was contacted to have him meet her by the Annan Waters three hours past midnight. Then she was lowered down into the gorge, and they waited until he showed up. Before he had even crossed the river, Steadman shot him with Diego's Arrow, killing him and subsequently killing Jeanne out of heartbreak.

The arrow bound Jeanne to the waters and she has stayed there ever since. Throughout her time there she's killed several individuals, most of them from Gillitie Wood, but she's also killed several Psychopomps.

Eventually a bridge was built on The Court's terms because nothing could cross the river. 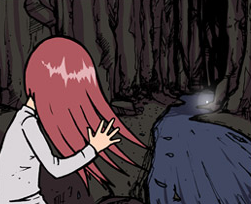 Antimony fell into the Annan Waters at the end of Chapter 7. Here, the ghost tried to kill her, but only managed to scratch her face as she was saved by Katerina Donlan. A Tic-toc also fell down here, after Antimony left, Ysengrin showed up and burried it. Presumably months later, the bird was dug up again. By this time it had rooted itself into the shore.

Roughly one year later, Andrew Smith threw Annie's Blinker stone down into the gorge so that she could look around etherically. Jeanne took the stone, thus stopping Annie from returning to her own body. Parley was also pulled into the ether and trapped there. Jeanne let them both experience parts of her life before she decided to kill them. Luckilly Parley managed to knock the stone out of Jeanne's hand and they were both returned to their bodies.

Roughly one more year after, Kat and Annie attempted to throw cameras down into the ravine, but Jeanne would always cut them in two.

Retrieved from "https://gunnerkrigg.fandom.com/wiki/Annan_Waters?oldid=11371"
Community content is available under CC-BY-SA unless otherwise noted.