Andrew Smith ("Smitty") is a student at Gunnerkrigg Court. He is in Queslett house, two years above Antimony Carver, and has the unusual ability to subconsciously create order where there was none. He first demonstrates this using a deck of cards that George Parley apparently carries around so she can "show off what he does", throwing them over his shoulder only to have them reassemble themselves into a perfectly ordered deck behind him. [1]

Polite and reserved, Smith was training to become a medium along with Parley and Antimony. He has a crush on Parley, and for a while didn't quite understand her feelings for him. They finally straighten up their relationship when Parley accidentally (?) learns of Jeanne's past in the most traumatic possible way and decides to take initiative on her feelings.

Recently, Andrew has become the next medium as a liaison for the forest, instead of Annie (she became medium of the forest instead).

His power seems to work such that when any task needs to be done and he's taking part on it, random events will contrive to bring the task to its goal as quickly as possible. He doesn't need to be aware of the goal, as he demonstrates by throwing Antimony's blinker stone exactly where she wanted it by accidentally hitting a bird. 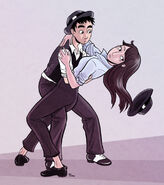 Retrieved from "https://gunnerkrigg.fandom.com/wiki/Andrew_Smith?oldid=12845"
Community content is available under CC-BY-SA unless otherwise noted.